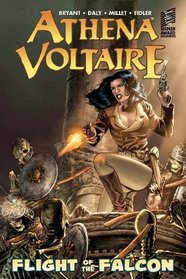 http://athenavoltaire.blogspot.com/
Artist: Steve Bryant
Writer: Paul Daly
Color: Chad Fidler and Jason Millet with Kevin Volo
Publisher: Ape Entertainment
Athena Voltaire is Indian Jones meets Xena. This air racer-turned-actress-turned-businesswoman doesn’t let her feelings get in the way of shooting bad guys and throwing sticks of dynamite while flying an airplane. Not surprisingly, the plot and side characters are a little hokey, but I’m writing this review to tell you that you should read this comic anyway. Athena lives up to her namesake’s intelligence and fighting prowess. First and foremost, Athena’s personality (and, at least for me, the fact that she’s not wearing a leather suit) compels the reader, so much so, one’s willing to forget about a couple Pirates-of-the-Caribbean-esque skeletons and a Nazi on the hunt for a secret tribal relic with untold powers (reminding one immediately of the latest Captain America movie). She is surrounded by a motley crew of side characters, including a female Nazi major (who, it seems, has a personal vendetta against Voltaire), two burley cutthroats, a holy man, and a slew of other equally diverse friends and enemies.
The artwork is vivid in full color that adheres to no particular scheme. Bright, bold sound effects in varying fonts give the comic a superhero quality, which adds to the panel after panel of action scenes. The panels are simple, allowing the reader to focus on the artwork within them. The writer uses two types of captions: third person captions to inform the reader of place and time and captions used to denote speech “spillover.” This “spillover” occurs when dialog from a character continues into a panel in which he or she is not present. This caption technique is unique to comics and adds layers, through juxtaposition, to a scene.  The creators of this comic also incorporate a scrapbook-style montage to tell Athena’s background story without wasting a ton of space. This background information was relevant in that it provides the reader with insight into Athena’s character, but since it does not directly move the plot, I’m glad it was not a space-sucking element.
Ultimately, Athena Voltaire is a very enjoyable read, especially if one is in need of a break from male dominated superhero comics but still desires some physics-defying action.
Rating: (see more information here about Ms.Comix’ rating system)
% Panels Devoted to Women
Too many to count. Let’s just say 98%
Women in Action
★ ★ ★ Women often participate in plot-moving action
The comics called Athena Voltaire after all.
Women as Leaders
★ ★ ★ Women often lead the other characters
Athena is in charge of them all.
Woman as Sex Objects
★ ★ ★ Women are depicted as sexy, but their allure does not define their purpose as prominent, plot-moving characters in the comic.
Yes, Athena is hot, but she does so much nonstop ass-kicking, it’s no surprise she’s in shape.
Men Deviating from Male Stereotypes
★ ★ Men sometimes deviate from male stereotypes of a logical mind, rationality, and lack of expression and empathy.
Most notably, the British archeologist at the beginning of the story has a hard time understanding how flippantly Athena shoots (and blows up) her enemies.
Something to ponder: How can modern writers tackle the challenge of setting a comic in a historical time period without marginalizing women (as so often occurred throughout most of history)?

One thought on “Review and Rating of Athena Voltaire: Flight of the Falcon”