In light of Black Widow’s kick-ass role in the Avengers movie, I’m reposting this fashion guide. I missed the midnight premier of the Avengers due to a final the next day (for my comic writing class, nonetheless), but I was totally prepared to dress like Black Widow for the event. Luckily, Sarah shows us how to do the Widow without the spandex…

I don’t think I need to make any case as to why Black Widow qualifies as a superhero. In fact, I’ve always wondered, if Iron Man, Thor, Captain America and Hulk get their own films, why can’t the Avenger, Black Widow? I’m pretty sure I saw her take down enough men in Iron Man 2 to qualify her for at least one movie.  Black Widow’s superb superhero skills, her upcoming reappearance in The Avengers, and her sexy, confident style make her an easy choice for my next Dress Like a (Female) Superhero article.

Since I don’t know that many women who would want to wear a skin-tight spandex suit, I’ve tried to capture the essence of Black Widow’s style in this collection. I took inspiration from her role in latest Iron Man movie and the business looks she pulled off. But no worries; there are a few spandex-suit-inspired pieces as well. 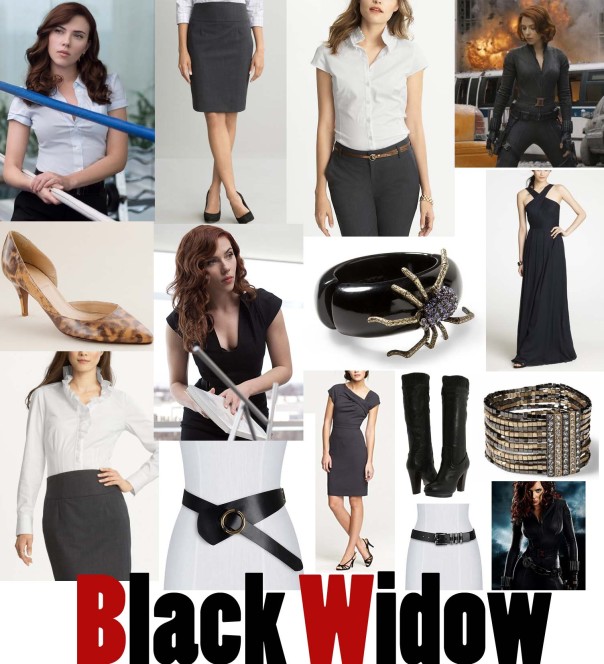 As far as I can tell, Black Widow hasn’t actually worn anything animal print, but these pumps seem to convey the attitude of the super hero: daring but not too flashy.

This look is inspired by Black Widow’s appearance in the latest Iron Man film. Black Widow (aka Natalia “Natasha” Romanova) plays the part of a confident, down–to-earth businesswoman when she isn’t kicking men’s asses in her spandex suit.

This wool skirt finishes off Ms. Romanova’s business look, and though you certainly won’t look like a superhero wearing it, you might be confident enough to feel like one.

If Ms. Romanova were to go out to say… a Tony Stark charity ball, I might expect to her wear nothing less stunning than this chiffon gown. The halter strap detail is icing on this dashing silhouette.

This short sleeve button down is almost identical to Black Wideow’s light blue shirt in Iron Man 2. Plus, every woman needs a staple button down in her wardrobe.

Inspired by Black Widow’s black dress in Iron Man, this J.Crew dress in a softer charcoal is no less sexy or confident-boosting than any spandex suit I can think of.

This belt will add a touch of Black Widow’s superhero style without going over the top. The piece is inspired by Black Widow’s thick, weapon-loaded belt.

Another very wearable belt inspired by Black Widow’s own. I can picture it with dark wash skinny jeans and a tee. It’s a simple but a daring addition to the outfit.

I couldn’t resist putting a spider piece in the mix.  The bracelet is a bold piece, but it’s probably the closest one can reasonably get to including a spider in an outfit.

This gorgeous bracelet is inspired by Black Widow’s utility cuffs/wrist ammunition (check out her superhero uniform).  I should say loosely inspired. The bracelet is much more stunning.

I will end this selection with a boot appropriate for Black Widow’s skin-tight uniform. After all, everything the boy Avengers are doing, Black Widow can do in heels.

By Sarah Spoto, Contributing Writer. Sarah is an art and business student who enjoys the occasional graphic novel and the more than occasional Marvel hero movie. She is pursuing a career in the fashion and apparel industry.

One thought on “How to Dress Like a (Female) Superhero: Black Widow”