Articles:Comic Books 101 Series: I share the wisdom and advice I learn from my comic book writing class.How to Make Comics from Script to PrintBooks: 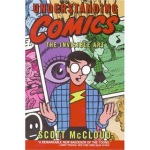 Understanding Comics. In Understanding Comics: The Invisible Art, Scott McCloud’s passion and reverence of the age-old art form of comic writing is apparent. In an easy to read comic book style, he breaks down what exactly a comic is, what’s been done with comics, and how comics may change in the future. This book is a great reference for those new to writing and drawing comics.

Writing for Comics and Graphic Novels. Writing for Comics is the first “how to write comics” book that I read as I began my adventure into the world of comic book writing. I recommend it for both those who are just starting out or for seasoned writers who are looking for an enjoyable book to read (Although, honestly, a very experienced writer will certainly get less out of it than a newbie).