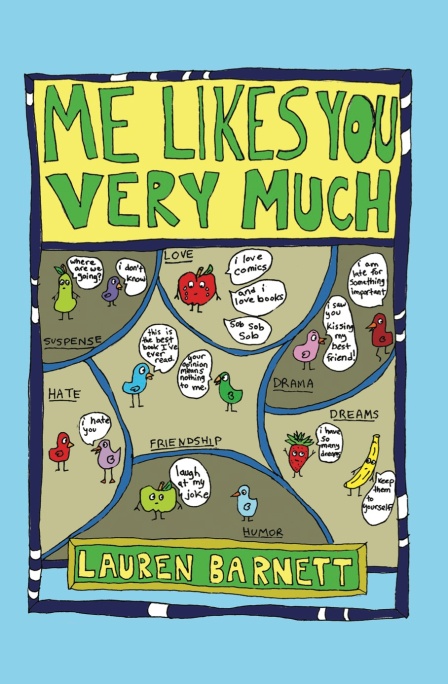 I like Lauren Barnett’s Me Likes You Very Much, a collection of the artist’s daily webcomics spanning from 2008-2012, very much. I’ll openly admit I was initially wary of Barnett’s plethora of talking fruits and birds. The art is sketchy and goofy and the novel is a motley collection of seemingly unrelated strips depicting inanimate objects conversing with each other. But Me Likes You Very Much grows on you very quickly. It grows on you to the point where you’re suddenly laughing out loud and handing the book to your friends saying, “This is exactly how I feel about recycling. Exactly how I feel.”

It doesn’t take more than a few minutes to realize that Me Likes You Very Much is a thoughtful commentary on friendship and relationships thinly veiled by sketchily drawn birds with potty mouths. 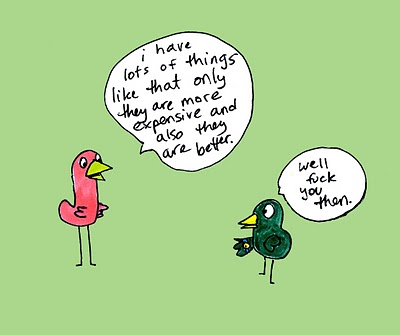 The birds speak what we as people—as friends and significant others—are actually thinking about one another. The characters speak candidly  (“I’m so sick of looking at your face every day” or “You are so boring. I am bored to death. Literally, I am probably minutes away from death because of you”) in a way we all sometimes wish we had the guts for. One of my favorite strips depicts a white bird commenting on a blue bird’s breakfast choice. “Bagels are really fattening,” he says, and the blue bird replies, “Well I thought you were a stupid asshole and I guess I was right.” Because we’ve probably all been in a situation like this and couldn’t react as honestly or as rudely as the blue bird (even though we wanted to), it’s nice to live vicariously through the comic strip. When you read Me Likes You Very Much, you can indulge in the rudeness and truth of the characters without actually messing up your own karma. 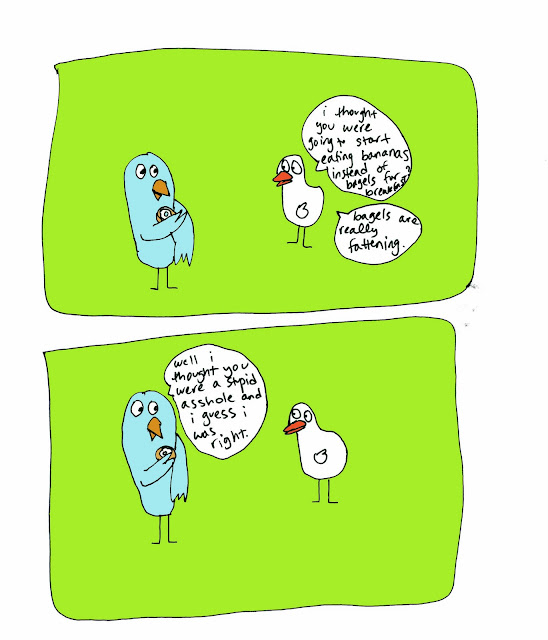 Scattered through the collection are full-page sketches of animals who speak in large bubble letters. These pages act as monologues, as the characters admit something brutally deep about themselves. I connected particularly with the image of a goldfish, frowning and thinking, “nobody loves me even though I’m effing gorgeous.” What may be so appealing about this sketch is the irony that a silly drawing of a blue goldfish could relate to a very real human concern: that we aren’t loved and that maybe we never will be even if we are the most gorgeous person in the world. 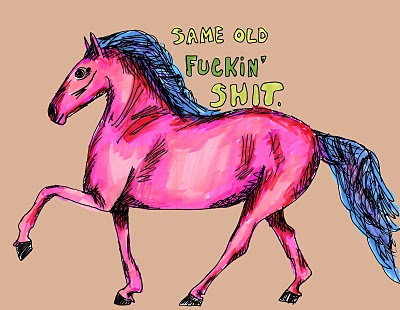 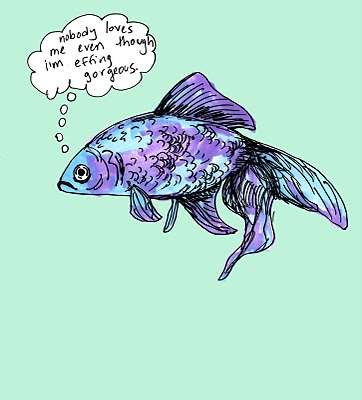 If Barnett can convince me in a matter of minutes that talking birds and veggies can reveal something about the human condition, there isn’t any doubt it my mind that $14 is a small price to pay for this graphic novel.

Chad Cicconi is one of those comic artists whose work you can easily identify, like a sharply dressed French man in a police line up of beggars. What I’m trying to get as is he’s got a cool, distinct (and dare I say, somewhat cartoony?) style that sets his work apart from the “typical” superhero stuff. His probably most well known comic work has been with Fracture, a superhero comic with a twist. I’ve been lucky enough to interview Chad, and so now you, too, can learn a thing or two about living the life of a successful comic book artist:

Convince us, in one sentence, that your comics are awesome.

If you like action-packed, thought provoking, funny, and brilliantly-drawn comics, you will love FRACTURE from Action Lab.

What is your favorite comic or graphic novel?
Other than my own work, of course, my all time favorite graphic novel is the original Marvel She-Hulk graphic novel from the late 1970’s featuring the best John Byrne art I’ve ever seen.
What (or who) inspired you to begin creating comics? Why did you begin writing and creating comics?
I’ve been a doodler my whole life, as well as a comic reader.  I’ve always wanted to try my hand at creating comics, but only got the courage to do so in the last six or seven years.  I only wish I’d done it much earlier.  In terms of my art inspirations, I’ve been strongly influenced by artists such as Art Adams, John Byrne, Kevin Maguire, Adam Hughes, and more recently, Stuart Immonen.

If your comics had a soundtrack, what songs/artists would it include?
I’m going obscure 80’s on you here —
Swing out Sister – Break Out, Twilight World
Other artists — Chieftans, Basia, Howard Jones, James Taylor, Save Ferris, Aquabats
Tell me about  “Fracture.”
One man’s descent into madness as he slowly discovers he has multiple personalities — one of which is a supervillain, intent on destroying the city’s greatest hero, and the other of which is… wait for it … the city’s greatest hero.  The story follows the main character’s attempts to save himself without losing his grip on reality. 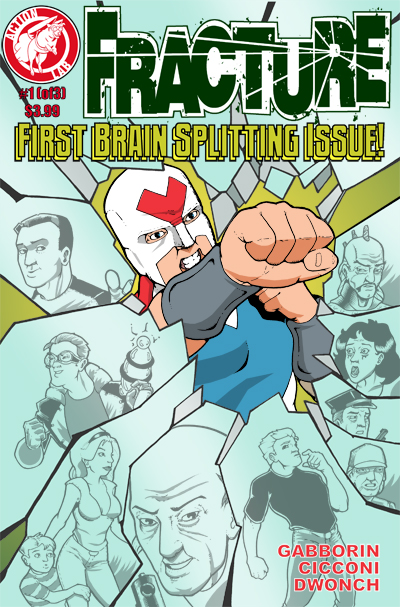 What path led you to becoming a professional comic artist? What was your experience with comics before taking this position?
As someone who loves to draw, and who has been a comic book reader for as long as I can remember, drawing comics was pretty much inevitable for me.  That I’m able to do so at a level where someone other than me wants to read them is just icing on the cake.  I’ve been working on drawing comics “professionally” since about 2006.  Before becoming the artist for FRACTURE, I drew a book called Mercury & the Murd for another independent comic publisher called PKD media, and prior to that, I drew a comic called “Baby Boomers” for Markosia, a comic company in the UK.  “Baby Boomers” was my first published work. 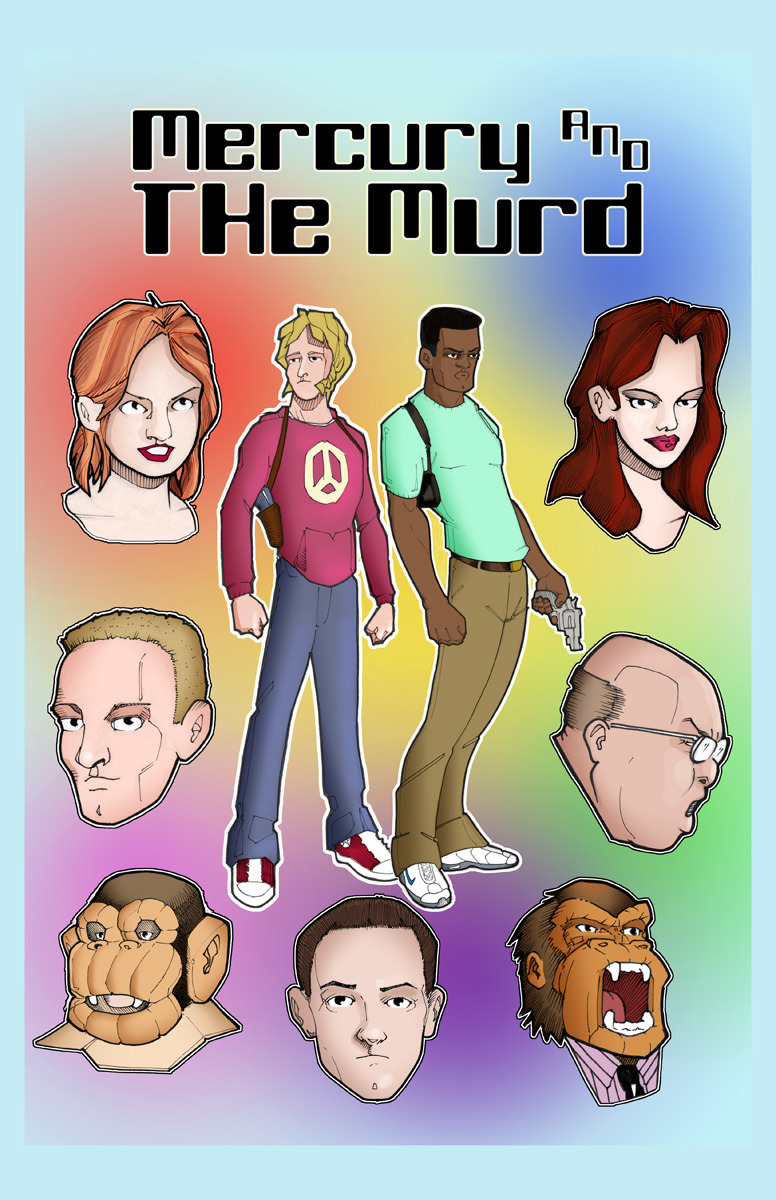 What was most intimidating about breaking into comics, and what tips would you give others who are hoping to break in as well?
As with many things, the first step is the most scary and intimidating.  Putting your own work out for someone else to see, rate, review and potentially criticize is a frightening thing, but it’s essential to do in order to become a comic artist.  So the best advice I can give anyone else is to draw as much as you can, learn as much as you can, and get your work out there, either in print or on the web. 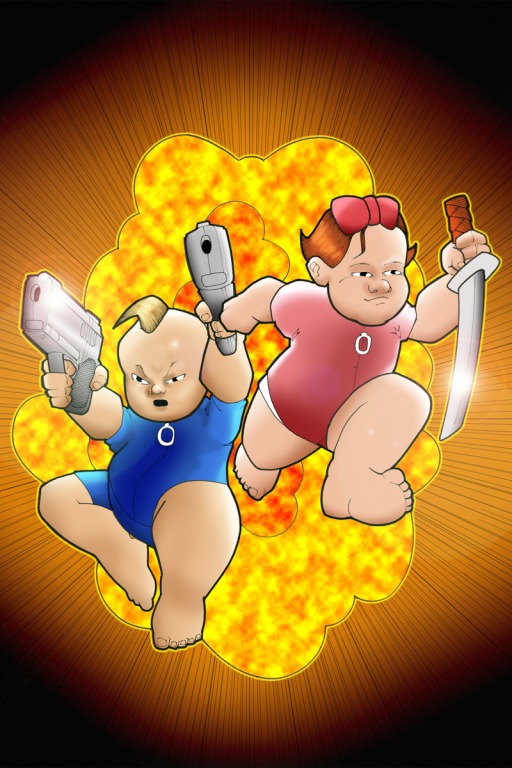 What advice would you give other aspiring comic artists and writers in regards to getting their stuff published?
Just get your work out there.  The barriers to “publishing” are lower than they have ever been.  A writer or artist can create comics and publish them in small print runs or via the webcomic form, with little money or assistance from others.  And this is a good way to get your work in front of others who might want to work with you on other projects or to publish your stuff to a wider audience.  Don’t wait for someone else to “discover” you.  Get out there and do it yourself.
How do you think the experience of comic creating and publishing differs for men and women (if it does at all)?
As a male comic creator, I can obviously only speak from my experience.  I’ve been lucky enough to work with a number of talented female creators, both in my own projects, and as part of Action Lab Entertainment.  I know (or at least I hope) the opportunities for female creators are out there, and increasing, but I’m not naive enough to think that there’s an equal playing field yet.
What is your next project?
I’m hard at work on FRACTURE volume II, which is currently scheduled for a release sometime in 2013.  This will be a 4-issue story arc, and will take our main character even deeper into his own psyche. 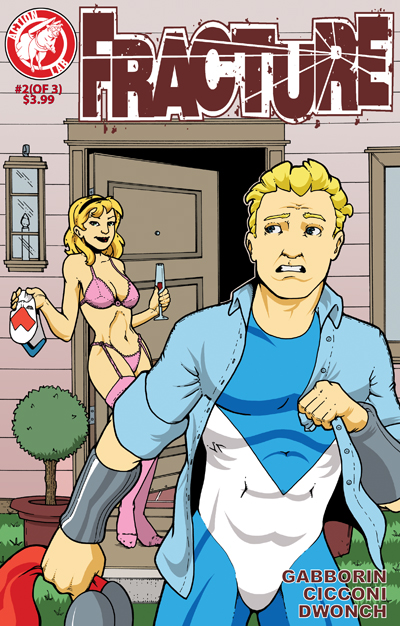 Is there anything else you’d like to add?
Only that it’s been great fun so far working with Shawn Gabborin (the writer of FRACTURE) and all of my colleagues at Action Lab.  In addition to FRACTURE, I’ve also been involved to a minor extent in helping to put out the other titles that have been released in the last year or so by Action Lab.

The theme for this genre-inspired fashion guide is Noir. Think Dick Tracey, V for Vendetta, and Sin City. For this selection, I’ve focused on creating a dark, sexy, and dramatic look. The whole look is anchored by a classic staple: the simple trench. Edgy, no? 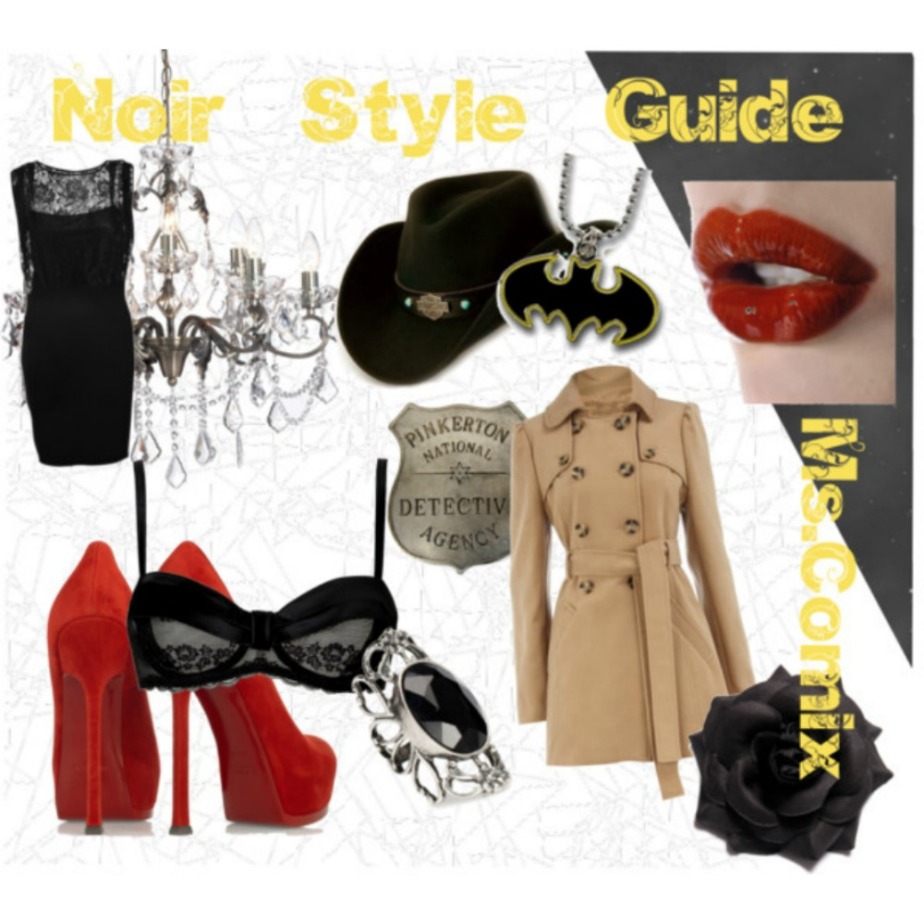 Sarah is an art and business student who enjoys the occasional graphic novel and the more than occasional Marvel hero movie. She is pursuing a career in the fashion and apparel industry.